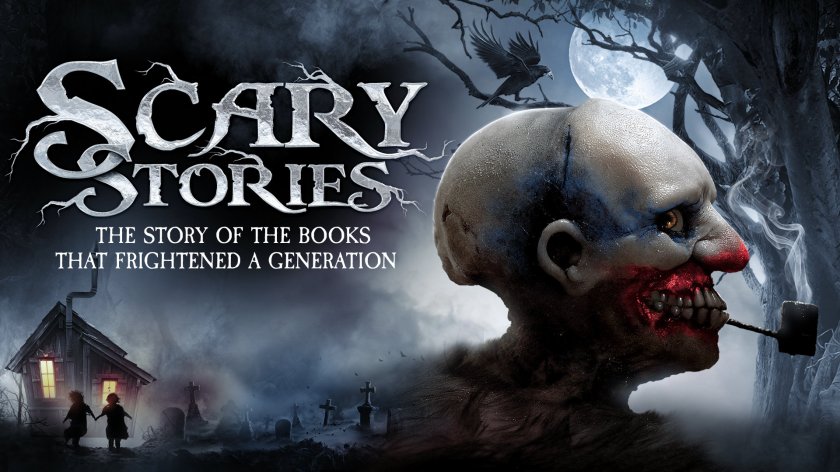 Earlier today I viewed a screener for a documentary that I had been genuinely excited for.

Huh. The Scary Stories documentary wasn’t quite what I expected. Perhaps nostalgia inflated expectations a bit; we’re only looking at three relatively short books that are more well-known for their artwork than their literary contents. However, if you grew up in the ’80s and early ’90s, these books no doubt were as much a part of your childhood as Ninja Turtles, Barbie, or Madonna’s ‘Sex’ book.

As is to be expected with this sort of instantly recognizable subject matter at its core, Cody Meirick’s film about the Scary Stories trilogy is full of personal accounts, but also tackles a far more meaty and relevant subject … censorship. The doc doesn’t get right into the controversy in full, but as we wind our way through the thorny wood, a number of artists, writers, and other professionals recount the effect Alvin Schwartz’s words and Stephen Gammell’s art had on them. Much of the original -inspired- artwork and animation shown throughout, whether they’re transitioning mechanics or overlays during interviews, are nice and pay homage to Gammell’s distinctive style.

The anecdotes are not terribly interesting, unfortunately. We don’t get to learn too much about the artist Stephen Gammell, though, admittedly, he is a very secretive man. Much of Alvin Schwartz’s life story is told to us via his estranged son, who does not appear to appreciate the importance of the books his father wrote until close to the very end of the interview. There is a tragic story there to be told, but the emotional weight is not heavy enough in the manner it is presented to be truly impactful. As the credits started to roll, I felt that I learned more about Schwartz’s missteps with one offspring than I did about his massive achievement with three small books.

The true bright spots of ‘Scary Stories‘ shines when we see how the books inspired art (video, photography, sculpting), and the fight against the ban hammer. The most interesting aspect of the doc is when we get to see how librarians fought back when busybody parents tried to get the books banned. The opposition and the resistance are both represented well here. We learn why the PTA moved to challenge the books, and just how quickly those who held power bowed to a vocal minority.

In the dreaded “current year” we find that censorship has once again become the new fad that sounds eerily familiar to the accounts shown in ‘Scary Stories.’ The books had earned a reputation, mostly blown out of proportion by the typical groups who find all manner of unsettling or hard-edged subject matter ill-suited for children. Some bravely fought to keep literature available for those who pursued it, and some blindly went along with the banning craze because of social pressures. Some agreed it should be banned without ever lifting a single page of the tome in question.

Sound familiar? Today books are being booted off of Amazon. Schools are curtailing certain important pieces of classical fiction due to containing the delicate subject of racism. Luckily direct comparisons are not made to today’s censorship trends as to that era when the “Satanic Panic” was in full and disastrous effect. This could be seen as a bit of a missed opportunity, but could easily lead to over politicizing a topic that doesn’t need that sort of albatross dangling around the neck.

It is nice to see the art that the “Scary Stories“ trilogy has inspired, but there’s almost too much screen time dedicated to this. We are treated to a few instances where the documentary explores just where the old folk stories Schwartz used to craft his book originated from. Sadly these are short-lived bursts. Folk lore is a very powerful thing, and has crafted so much of what our entertainment is based on. A deeper dive into how obscure legends became well-known scary stories would have been worth an hour or two alone as the focal point.

We do get to see the reactions of children when being read some of Schwartz’s works. Many of the stories found in the trilogy can be parables for everyday life, especially during our early years. This film did something that I wasn’t expecting. It made me question the place horror has in our society today. Perhaps the charm of these somewhat dark dales of virtue, mistrust, mortality and the like may be a bit lost on this new generation of readers. Examples of real world horrors are so easily available online that a story like “The Hook” isn’t as effective when trying to extol the virtues of chastity or the dangers of promiscuity.

‘Scary Stories‘ is a solid look back at what just a few books could do as far as forming the minds of kids and outraging overly protective adults. There was subject matter that deserved much more attention, but it is an entertaining collection of recountings and brief biographical morsels that any fan of the original books will enjoy.